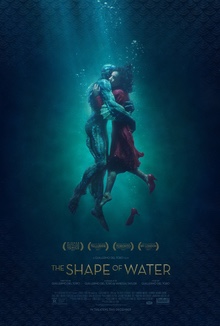 It’s been too long since I blogotroped. I have no excuse, other than a general ennui with all things internet. But, as I was filling out my tax stuff, I realized that if I’m going to deduct my domain name registration as a business expense, I’d better get back to business.

So, down to business. I saw Guillermo del Toro’s reboot of the Little Mermaid. In a big boy theater with a big screen.

(Portland’s nonprofit Hollywood Theatre to be precise. A highly recommended venue. It is more a temple to the arts of cinema and video than a mere movie stadium seated multiplex.)

As is my won’t, I’m a sucker for any movie that employs sign language to move the plot without being preachy (I’m looking at you, Oscar nominated short The Silent Child). Because, you know, Ariel lost her voice, so she’s got to make to be able to tell her boss where to stick his unwanted sexual advances somehow.

There’s so much I could say about this weird and beautiful fairy tale, but how to do so without giving away more spoilers than I already have?

I can’t, so I’m just going to have to give it a glowing rating of 5 out of 5 pairs of rotting, gangrenous, reattached severed fingers.

I'm not really a robot, but sometimes I think like one. I've written a time travel novel and a pretty informative zine about life on the autism spectrum. View all posts by partlyrobot